BIG NEWS: Government announces opening of schools and colleges in the state from February 1, government lifts lockdown and night curfew

BIG NEWS: Government announces opening of schools and colleges in the state from February 1, government lifts lockdown and night curfew 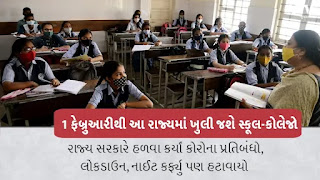 The state government has announced to start all standard schools in Tamil Nadu from February 1.
All standard schools will start from February 1 in Tamil Nadu
Big decision of the state government
Government announces declining corona cases in the state
Some states in the country have now started schools and colleges. With the third wave of Corona weakening, the Tamil Nadu government has taken a big initiative to open schools, believing that educational work should start now. The Stalin government of Tamil Nadu has made a big announcement to open all standard schools and colleges from February 1. After the announcement of the state government, after February 1, all the students can come to the school and start the educational work. As per the order issued by the state education department, all schools and colleges can start offline schools by following the Kovid protocol.
Lockdown and night curfew also
lifted in Tamil Nadu The state government has also announced the lifting of night curfew.
The new rules issued by the state government allow 100 people to attend a wedding and only 50 people to attend a funeral.
The government has formulated a master plan to open schools across the country
Sources said that the central government is actively considering reopening the now closed schools as the third wave of corona has weakened in the country. The Central Government is working on a model of opening schools for offline classes in a systematic manner following all the protocols related to COVID-19. Offline classes in schools have been shut down in most parts of the country since the new omicron type of virus came out. Due to Corona's third wave, students have been attending most online classes for almost two years, except for a short period. 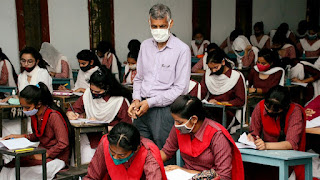 Parents are demanding the opening of schools
Sources said, "As parents are demanding reopening of schools, the central government is working on a model for reopening schools following all the protocols related to Kovid." -A delegation of fathers met Delhi Deputy Chief Minister Manish Sisodia on Wednesday and handed over a memorandum signed on behalf of more than 1,600 parents, demanding reopening of schools. Similar demands have been made in some other states, although the second category of parents is in favor of continuing online classes.
This News from VTV GUJARATI News Channel. Date: 28.01.22