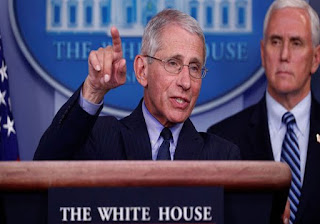 The top US scientist has warned that the corona virus can slowly transform into a seasonal illness, a weather condition.  Dr. Anthony Fouchi, a specialist in infectious diseases in the United States, said controlling the corona virus is becoming impossible all over the world.

Dr. Anthony Fouchi, an expert on infectious diseases at the National Institute of Health, said it was impossible to get the virus out of the earth this year.  That means the Corona virus infection could spread again in the coming flu season in the United States.

Fouchi said the US is strengthening its readiness because of the possibility of Corona returning.  He said that the United States is conducting clinical trials to develop and administer the vaccine.

Fouchi said that if Corona re-emerges, then we have at least the means to stop it.  Fouchey had previously said that the US would be ready for the Corona virus vaccine within 12 to 18 months.

Dr. Fouchi claimed that the Corona virus could have killed more than a million people in the United States.  He warned that states that are not issuing orders for people to stay in homes are putting more of the country at risk.

According to the WHO, 40 vaccines are currently being tested for the corona virus.  Some of these vaccines have reached the testing phase in individuals.

So far in the United States, corona virus has killed more than 9000 people and more than 3 million infections have been reported.  US President Donald Trump says next week is going to be a tough one for Americans.